Terrorism. Non-state actors. These groups of actors within the international system are what make scholars and policy practitioners alike stay up well into the night. Their very definition invokes the opaqueness which makes it so hard to address, define and combat. What drives an individual to such desperation that they are enticed to give their lives to an extremist organization? For the past thirty years, nationalism and postcolonial politics contributed to our understanding of militant extremism and terrorism, including Al-Qaeda and its franchises. However, this mentality may not extend far enough into actually understanding the driving forces behind recruitment strategy and motivations for individuals to join such extreme organizations.

Across the Middle East and North Africa region, resource scarcity prevails. In a naturally arid climate, freshwater sources are meager, and agriculture difficult or impossible to cultivate. Further, the majority of nations in these regions share common characteristics among developing economies: large-scale inaccessibility to basic resources, burgeoning populations, colonial histories, corrupt governments and wide-scale unemployment. Some, including Yemen, Libya, Mali and Algeria have histories of war and civil conflict, leaving them at the brink of failure. So how do we address these kinds of issues in the long-term?

Access to basic resources, including employment, water, food, shelter and healthcare, are the building blocks for sustaining life and nationhood. Without those necessities, people may be enticed to extreme measures, including the drastic decision to migrate thousands of miles for a better quality of life. Or they might join a group that either provides them with such resources or promises a future with those rewards. Several Al-Qaeda franchises, as well as ISIS, have been posting pictures lately of scrumptious banquets as to insinuate that the jidahists are living the high life in war-torn Syria. This is a clear juxtaposition to the immense food insecurity faced by thousands of Syrian refugees, a situation so dire that vulnerable children are dying of malnutrition and water-borne diseases. 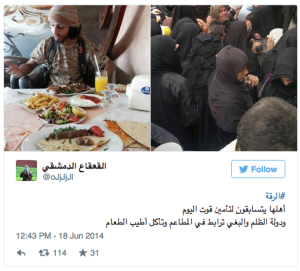 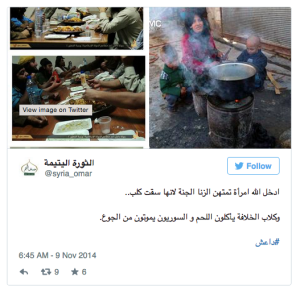 Images via The Week

A similar phenomenon is occurring in Saharan Africa. Al-Qaeda has raised its profile in Mali after the 2013-14 French intervention, integrating with nomadic groups by offering food and water to recruit impoverished individuals in the plethora of slums across the country’s urban areas. This resurgence has led some to criticize the military intervention, Operation Serval, as a failure, with such recruitment tactics allowing them to gain a foothold in critical areas. Clearly, these groups are not limiting their recruitment to others who share their religious ideology and political aspirations. They want bodies, and individuals–especially young men–for fighting, and these men are desperate to escape such dire circumstances. Although food and water are not the only recruitment tactics, they are jarring simply because it is a relatively easy fix in comparison to military intervention, clandestine hunts for Al-Qaeda leaders and overseeing negotiations. Mali is an extreme example, but may be more of what is to come as terrorist operations and severe scarcity intersect over the coming years.

The long-term solution to mitigating terrorism across the region starts with a humanitarian approach. Military intervention, peacekeeping and other traditional tactics are arguably part of the solution, but policymakers need a comprehensive approach and not a policy band-aid. Perhaps we should consider incorporating food and water security into the security agendas of the United States and its developed allies. A failed state has severe implications for the stability of the Middle East and North Africa region due to haven it creates for terrorists (see, Iraq), and the overspill it generates for neighboring countries, including Nigeria, and even Western Europe. For Western European nations such as France, the United Kingdom, Italy and Spain, the Middle East and North Africa is within immediate geographical boundaries, making conflict and illegal immigration much closer to home. The current migrant crisis has drawn thousands from the Middle East and North Africa. Before the current E.U. migrant crisis, North African illegal immigration was already growing out of control, the Mediterranean Sea a thin barrier to the pressing national security of these European nations.

Poverty and resource insecurity is not merely a remote problem, subjugated to areas of the developing world and thus inconsequential in the lives of those residing in the developed world. Extreme depravation is a serious threat to U.S. and European security and defense policy because of the threat it imposes on such a fragile region and the immediate security of its European allies. Incorporating unconventional, non-traditional strategies may become an integral part of its strategy and long-term stability to the region. Cultivating programs that support sustainable food production, freshwater extraction and industry can act as deterrents for membership into these militant groups and reduce the growth and popularity of extremism as a whole across the entire region.